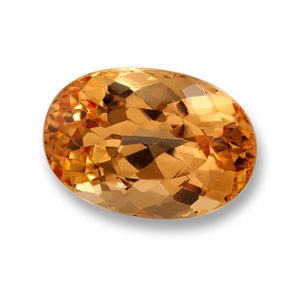 Precious topaz comes in yellow, red-brown, pinky red, pale green, colourless and light blue. The light blue stone is called “Sky Blue”, a more intense blue (which is heat-treated) is called “Swiss Blue”, and then finally the most intense teal blue stone (also heat-treated) is commonly known as “London Blue”. Most people would not be able to tell the difference between aqua and Sky Blue topaz, as they are very similar in colour, and possibly a little harder, yet is still sensitive to pressure with strong cleavage – so is a very good substitute for aquamarine. Blue is a always good seller – traditionally in the jewellery trade, blue sells the best – it is well-priced and very attractive. Keep that in mind for resale! This gemstone is found naturally in the the softer colours, such as pale green (not too different from peridot) and a very pretty salmon pink (the most valuable). Many people refer to citrine as golden topaz, or smoky quartz as smoky topaz, which is not correct, as these are also both part of the quartz family. Stones with very intense colour have been heat-treated – the very common yellow stones turn pink or blue when heated. Most topaz is mined in Brazil, and the Far East, with smaller deposits in many other parts of the world.