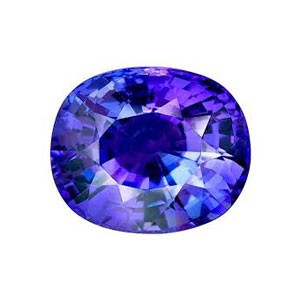 Tanzanite is the blue version of Ziosite, which is also found in green and red. Tanzanite was first discovered in 1967 in Tanzania, hence the name. It was first used by New York jewellers Tiffany & Co, but since then a marketing genius has put it on the world map. The marketing has been so good that most people have heard of it, and would like to own one. It has an incredible intense colour, but is very soft. Other semi -precious stones which have incredible colour but are soft, do not hold a good value, but tanzanite, despite its softness is almost as expensive as a good sapphire, which is hard and can be an incredible cornflour blue. This can be due only to the marketing drive. Most tanzanite comes out of the earth brown, and are heat treated to be blue, at temperatures of 400-5C. If the blue is not intense enough, it is “colour enhanced”. There is no problem in heat enhancing stones, as long as the client who is purchasing the stone knows what they are buying. They need to know if a stone is naturally coloured or not. I would discourage anyone to wear a Tanzanite in a ring, unless it is purely a dress ring. Wear it preferably as a pendant or earrings. If you asked any setter in the trade what they thought of tanzanite, they would probably like to kill the genius that put it on the map!