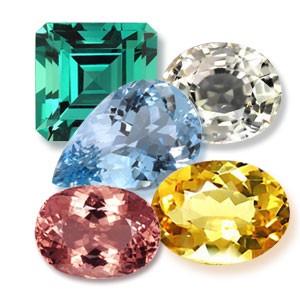 Beryl Gemstones are fascinating because there are so many colours and varieties. Within the Beryl gemstones group there are emeralds, aquamarines, yellow, yellow/green, pink, and colourless Beryl. They all have the same chemical composition with different trace elements causing the different colours. Beryls can be faceted or cut en cabouchon and is a great gemstone to consider for an engagement ring.

Besides the most famous beryl gemstone of them all, the Emerald, there is a pink Morganite, yellow Heliodor, clear Goshenite, blue Aquamarine and red Bixbite. 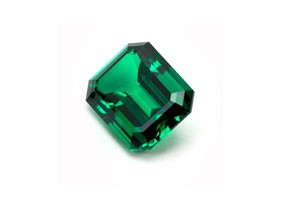 The Emerald is the most rare of the Beryl gemstones group, and therefore more expensive. One very seldom finds large, clear emeralds. There are some famous large emeralds, but these would be part of the crown jewels or national collections you find in the London Museums. They are a very specific green colour, and the term “emerald green” is not only used for gemstones. The name comes from the Greek word – Smaragdos, meaning green stone. Emeralds are very rarely free of inclusions, bubbles, healing cracks or foreign crystals. These inclusions are known as the “jardin” or” gardens”. The inclusions cause internal stresses, and combined with the brittleness of emeralds, means emeralds have to be worn with extreme care. They are sensitive to pressure and temperature change (so washing dishes is out of the question! A dishwasher must be included with the purchase of every emerald ring). Most commercially- mined emeralds are from South America. There are many synthetic emeralds on the market, as well as glass also known as “paste”, doublets, and even go to the extent of “plating emerald” onto colourless beryl. 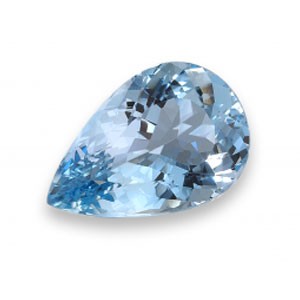 Aquamarine is light-blue, blue and blue-green. Its name is from the Latin word meaning “Water of the Sea”. Sailors used to wear it for protection while out at sea. The darker, intense blue is the most highly sort after, and becoming more difficult to find. Large, clear, deep colour crystals are not that common any more, and if pale large stones are found, they are usually heat treated to become a more intense blue. As with emeralds, they are hard but brittle, so care must be taken when wearing them, but as they tend to be “cleaner”(fewer inclusions) than emeralds, they are not quite as easy to break. Aqua is found on most continents but mainly in South America. Smaller deposits are found in Southern Africa, Burma, USA, Russia and Australia. It is not economically viable to produce synthetic aquamarines. Most people would not know the difference between a blue topaz and an aquamarine gemstone, blue topaz being relatively inexpensive. 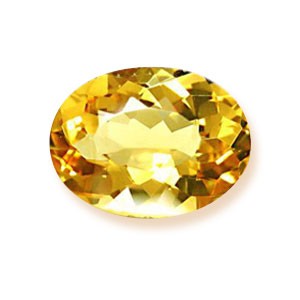 Also known as “precious”, beryl also comes in pink (Morganite), golden yellow to yellow (Heliodor), yellow green and colourless (Goshenite). As with all beryl gemstones, it is hard but brittle, but because of it’s hardness, if cut well they can be incredibly beautiful stones. They are not terribly common commercially. In the jewellery industry you will often find that consumers are not familiar with these stones and their value, and will not buy them. It would take a much more “educated” jewellery buyer or someone with a keen interest in gemstones to know about Heliodors and Morganite, and the their value.